If you’ve ever been a member of a wedding party, you’ve probably heard somebody at some point mention the “something old, something new, something borrowed, something blue” wedding custom. This practice is intended to bring the bride good luck on her wedding day and a lifetime of nuptial bliss. 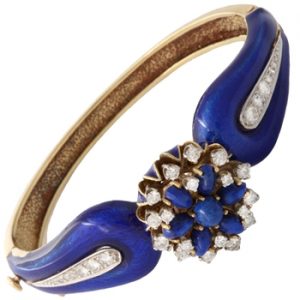 Many people, while loyally following this superstition, aren’t really sure where its origins lie. The saying itself is actually borrowed from an 1871 Old English rhyme (Something olde, something new, something borrowed, something blue, a sixpence in your shoe).

In 1883, the rhyme was encoded by English author Charlotte Sophia Burne in her publication, “Shropshire Folklore: A Sheaf of Gleanings,” which gives a more precise interpretation. Here’s a breakdown of the author’s work.

Burne intended for the “something old” to serve as protection for the bride’s future baby, as it represented prosperity and fertility.

It is unclear what the “something new” signifies in the work of Burne, but over the centuries, brides and wedding parties have interpreted it as optimism for the future, another sentiment of good luck.

The something borrowed is actually in reference to another bride who transfers her luck to the bride-to-be by letting her borrow a piece of clothing that she can wear on her big day. This garment’s purpose is to ward off an “evil eye,” or, other available suitors.

According to Burne, it is advised that the bride-to-be wear a blue garter underneath her wedding dress as a way to distract the “evil eye” of an outsider. The tradition is also a measure of good faith and fortune.

How about putting a modern twist on the something old, something new, something borrowed, something blue tradition? Frank Pollak & Sons sells unique vintage and modern jewelry pieces that are wedding day worthy.